A Couple of Very Cynical Parables

The Parable of the Apple Tree

From an old blog post of November 29, 2011, edited with an introductory note a few days later. 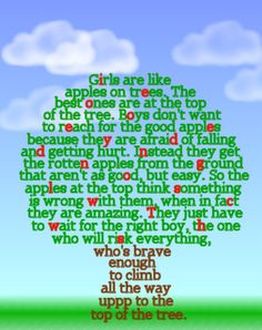 NOTE: When I wrote this I was rather annoyed and distressed by a certain talk given to the Young Women [sic, actually all women in the Church] which they now feel the need to quote ad nauseum. Nabe Fise (my would-be girlfriend from Ecuador) explained to me that I'd gotten it all wrong and all the contempt has miraculously vanished from my heart. Of course, I know I'm not the only one who misunderstood and I think the talk really should have been worded a lot differently, but whatever. My parable remains here for anyone who happens to be feeling particularly cynical.

Once upon a time there was a guy who had an apple tree in his backyard. One day, feeling a bit peckish, he decided to climb it and get an apple. Some apples had fallen already but he figured they were too easy to get and couldn't possibly be any good.

So he climbed the tree and was about to grab a tasty-looking apple when a voice yelled "Hey! Hands off! That's my property!"

Too late, the guy realized that this particular branch crossed the property line into his neighbor's yard. He scrambled away but was not fast enough to avoid being shot. He fell out of the tree. Miraculously, the bullet had only grazed his chest, but the fall broke both of his arms.

A few months later he was fully recovered and wanted an apple more badly than ever. He climbed again, taking care this time to stay on his side of the tree. He was just about to grab an apple when the apple mysteriously grew a mouth and yelled "Hey! What do you think you're doing?"

"No duh," it responded, "but not by you." It bit his fingers as hard as it could. He jerked back and fell out of the tree once again. For a second time he found both of his arms broken. He hadn't been shot this time but on the way down a sharp branch had nearly done the job just as efficiently.

In another few months everything was back to normal. Still wanting an apple, he approached the tree more cautiously this time. He decided to play it as safe as he could.

"Hey up there," he yelled to the apples, "any of you on my side of the tree want to be eaten?"

"Yes please," said an apple, "I've been waiting and waiting to be eaten but no one will climb up here to get me. I can't for the life of me imagine why not!"

"No, me neither," said the guy with a barely detectable trace of sarcasm. "All right, um, is it all right if I just climb up halfway, or two thirds, or something like that, and you let yourself drop down to me?"

"What?" scoffed the apple, incredulously. "That's not my job. Come get me."

He looked at the apples on the ground once again. They didn't look that bad anymore. Some of them had fallen just hours ago and looked as fresh as the ones on the tree. He reached for one.

"Don't even think about it," said the apple in the tree. "Those ones are nasty. They all have worms."

The guy thought about it for a minute. Then he cut down the tree, made it into a cabinet, made the apples into applesauce for a local food bank, and ate only candy and ice cream from then on. He had a short but very satisfied life.

The Parable of the Blind Pilot

From an old blog post of October 23, 2013. The irrelevant beginning paragraphs are retained just in case anyone finds them interesting.

Maybe I should have written something about that government shutdown thing. The fact is, while this website began as primarily political in nature, my enthusiasm waned after a while. I can only be obsessed with politics for so long before I realize it's like being obsessed with fertilizer, except with more corruption and less intelligence. And the government shutdown had no measurable effect on my life, so I didn't think about it and saw no reason to write on it. (Maybe it did affect my life somehow, but the only way to know for certain would be to re-live the last month in an alternate timeline where it didn't happen.)

Yesterday for Uncommon Hour we had the privilege of hearing from world-class Old Testament scholar Margaret Barker, who was superior to the last speaker in at least a couple regards - a. she had a British accent and b. she had a clue what she was talking about. She taught us a bit about the role of the temple in ancient Judaism, how it changed, and how one of the Messiah's roles was to restore it to the way it had been. It was very interesting. Reading or listening to the research of scholars of such calibre allows me to feel like a super intellectual just by smiling and nodding.

And now, our feature presentation.

The Parable of the Blind Pilot

Once upon a time (this is a parable, not a fairy tale, but it works) there was a blind guy who thought it might be kind of neat to be a pilot if things worked out that way, but never felt any particular burning desire to do so or felt that it was worth making a concerted effort. Still, all his friends yearned to be pilots and talked about how awesome it was and how universal and natural the desire to fly a plane was, and sometimes he felt kind of awkward about that.

One day he casually mentioned that the engines of a particular airliner coming in to land sounded mighty fine. (He didn't comment on the plane's appearance, because he was blind.) His friend who was with him asked, "So, when are you going to fly it?"

"Tell you what," said his friend, "let's fly it together. You can be my co-pilot."

"Well, okay," said the blind man, who would have felt awkward saying no. So they flew the plane and he had a good time. While he didn't regret the experience, and appreciated it breaking up the normal schedule of his life, he didn't find it to be significantly more fun than staying at home and reading a book. (In Braille, because he was blind.) He figured he might do it again someday but probably wouldn't bother.

Well, a few months later another friend asked him to co-pilot so he did it again. Then one day they were all together and one of them suggested that he fly a plane by himself, work his way up to a pilot's license, and work for an airline or something.

The blind man laughed, until he realized they were serious. "Wait, what?" he said. "Guys, going with you is one thing, but I kind of feel like being able to see might be a prerequisite for taking off, reaching my destination, landing..."

"Oh, stop being so down on yourself," said the friend. "Low confidence is unattractive."

"Look, nobody's perfect," said the other friend. "But you're such a nice guy. You can do it."

"I don't see the correlation between those observations and that conclusion."

He knew they would pester him forever unless he tried it, so he did. He crashed the plane into the side of a mountain and it exploded in a giant fireball and he barely escaped with his life.

"Wow!" said the friend who came to visit him in the hospital the next morning. "Did you see that explosion?"

"Oh, right," said the friend. "Well, anyway, I'm sorry for your loss. It happens to the best of us, y'know? Flying sucks."

The blind man was startled to hear that. "Wait - then why is everyone so enthusiastic about it?"

"Because planes are awesome. Right then, as soon as the skin grafts are all grafted, you're gonna get back out there and try again, right?"

"Of course you are! You're no quitter! Grab life by the horns! Seize the day! Excelsior!"

"Gesundheit. Were you raised by bumper stickers?"

"Hang in there. Here, just a sec, I'll head down to the gift shop and get you some pretty balloons to look at."

Eventually the blind man recovered and, because his friends immediately started pestering him and he'd forgotten exactly how much the crash had hurt and he did still sort of enjoy flying, he tried it again. He crashed again. This process was repeated about seventeen times, which will not each be explicitly described because that would get tedious and parables are supposed to be short. Suffice it to say that what the blind man lacked in eyesight, he made up for in being virtually invincible.

One day while he was in the hospital, feeling the all-too-familiar feelings of hospital sheets and pillows and of bone shards poking through his skin, he overheard one of the nurses talking to another. "Boy, did you see that plane crash victim? Ouch."

The blind man knew she couldn't have been talking about him because she, like all the rest of the hospital staff, was on a first-name basis with him at this point. "Hey, what guy?" he called out. "Is there another blind pilot around here?"

"Oh, no," said the nurse, "he's just a regular one. He was just flying along, confident that all his instruments were reading normally and he would reach his destination in a timely fashion, when wham! Mr. Seagull, meet Mr. Jet Engine. He never saw it coming. The pilot, I mean. Well, I guess the seagull didn't either."

The blind man pondered this for a while before speaking.

"You mean to tell me," he said finally, "that people who can see still crash their planes sometimes?"

"Well, yeah," said the nurse. "It happens all the time. Flying sucks." [Author's note: This is a creative liberty taken for parabolic purposes. In real life, plane crashes are very very rare. Of course, that fact isn't very comforting if you're actually in one.]

At that moment another nurse rushed in. "Hey, that guy we were just talking about, he just died."

"Oh dear," said the first nurse. "Well, he was doing what he loved." To the blind man she added, "Don't let this discourage you. Stay confident."

A few days later one of his friends stopped by. "Hey," he said, "I figured you must be bored in here all the time, so I brought you a Rubiks' cube."

"Eh, whatever," said the blind man, reaching out to take it with the arm that wasn't broken. "I've got this. Excelsior!"

As with the parables in the Bible, the meaning of this one is discernible only to very wise people. If you can discern its meaning, then you are a very wise person and have something to feel good about.

My other websites:
Life, the Universe, and Everything Wiki
Entebbe Alpha & Omega Development Organization Uganda